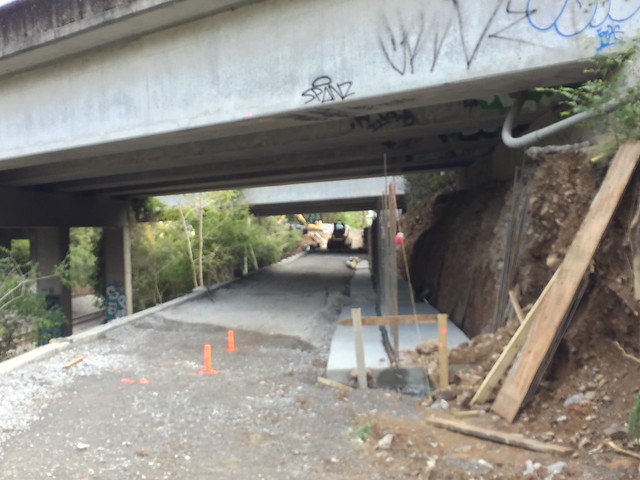 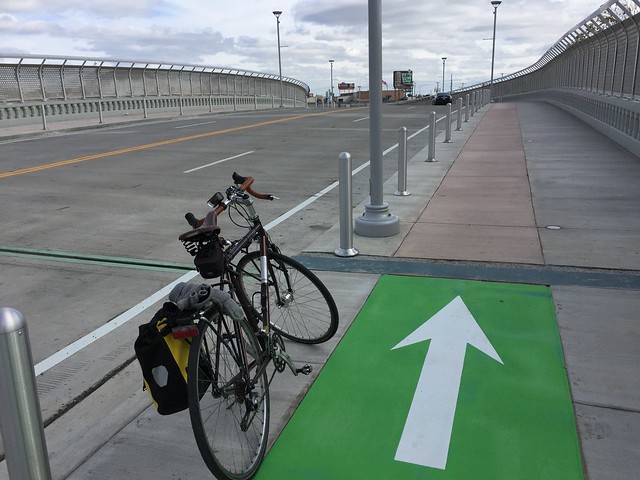 The group represented many different bike-related organizations, ranging from non-profits, to various types of cycling enthusiasts (roads, off-road, commuters, slow-riders, night riders) to people who own pedal-propelled businesses — from shops to bike-tour businesses to food delivery services to the owner of Pedal Pub (although, I guess, technically-speaking, it’s not a “bicycle,” but it is powered by pedals ).

Each person who wanted to could spend five minutes talking about what their company, non-profit, advocacy group, public agency does. One after another, I heard some very inspiring stories about groups who have done various things, ranging from helping to build many of the off-road bike trails in Middle trails to learning more about one of my heroes, the quietly inspiring Dan Furbish of the Oasis Center Bike Workshop.

My passion for bicycling is focused on transportation, recreation and travel. It’s amazing to meet others who love bikes but who express their passion in so many different ways and that have so many different positive outcomes.

One day, when Nashville completes what’s necessary to have the walking/biking infrastructure necessary to make people feel safe, I’ll be appreciative to the folks I’ve met in the past three years who have, in often quiet ways, done so much to create the foundation that’s necessary to build a great bicycling/walking town.

Which brings me to an announcement Nashville Mayor Megan Barry made earlier this week and that is covered in this Tennessean story.

As my passions these days include doing what I can to make Nashville a city for people who walk and people who ride bicycles — as well as people who drive cars — these kinds of projects regarding specific locations and time-frames for development are what is needed to convey to Nashvillians why I’m optimistic about the future. (Impatient, but optimistic.)

This post, while excessively rambling, ties together two of the topics I’m thinking about a lot these days. 1. The future of local and niche media. 2. Bicycles.

I promise, if you’ll stick with the rambling, somewhere below quite soon, the two topics merge.

Earlier today, the 40th annual RAGBRAI kicked off in Sioux City, Iowa. The “R” in RAGRAI stands for the word Register.  The word Register stands for The Des Moines Register, the once-great newspaper that is now owned by Gannett*.

The other letters in RAGBRAI stand for Annual Great Bicycle Ride Across Iowa.

Back in the early 1970s, when The Des Moines Register was still a great local newspaper, a reporter, a columnist and a guy from the PR department organized the first ride across Iowa as a, well, hair-brained idea. Today, that hair-brained idea has grown into the largest event of its type in the world. Each year, people travel from all across the country and around the world to participate in what is rather large “group bicycle tour” (this is not a race) across the state.

How large? (Answers to this and many other RAGBRAI questions can be found here.) Today, they have to limit (via lottery) the ride to 10,000 cyclists (8,500 register for the entire 400+ mile ride, 1,500 others have one-day registrations).

The more you learn about RAGBRAI, the more you realize that it is nothing like, except for the use of bicycles, the better-known biking event that ended today in Paris, France, Tour de France. First off, the names of these two events indicate immediately that one event is French and the other is heartland America. Just listen how beautiful it sounds when you say, “tour day fraaahhhnnzzz.”

RAGBRAI is more like the sound a donkey named Rag makes.

However, other than its trainwreck of an acronym name, it can be argued that RAGBRAI is a far better event than the Tour de France.

The Tour attracts elite professional athletes who are extraordinarily trained, conditioned and  willing to be human lab rats for any new maskable chemical concoction or voo-doo designed to help them ride up the ascents of the Pyrenees faster than most of us descend them. RAGBRAI, on the other hand, attracts regular people with varying degrees of training and conditioning who only use the word draft when it is followed by the word beer. RAGBRAI is a rolling party of mostly healthy people who, no matter if they are riders, spectators, volunteers and hosts, all collaborate to make each year more fun.

So what does this have to do with the future of newspapers?

First, let me admit I don’t know how RAGBRAI is set up or who “owns” it. The sponsor page implies that the Des Moines Register Media is the naming sponsor. A little digging, however, and you’ll discover that Gannett is the owner of the for-profit event. For reasons that I sort of understand (but do not agree with), some people assume that something so public and participatory and dependent on volunteers should be a not-for-profit event that is designed to raise money for a cause.

However, these same people don’t apply that same logic on NFL football teams, for-profit enterprises that benefit greatly from public funding and volunteers who gladly pay just for the chance to scream in support of the team.

So, let’s drop the “not-for-profit” blinders for a moment and consider the business models of certain media companies that own sports franchises and the media used to promote them and distribute them and sell sponsorships related to them, even manage the arenas in which they play. The list is too long, but just a few current examples: Comcast is parent of Comcast Spectacor, and then there is Madison Square Garden Inc., or Liberty Media.  Before the current economic downturn caused many large companies to pare back their diverse holdings, the media-sports franchise nexus was even more pervasive: notably, Ted Turner’s Braves, The Chicago Tribune’s Cubs, Disney’s Mighty Ducks and Angels.

And then, there are non-sports events and festivals that seem like non-profit community or fund-raising events that are actually for-profit events owned by media companies. They range from The New Yorker Festival to the massive Essence Musical Festival.

In the world of Business-to-business media, it has long-been a key part of the “b-to-b business model” to “give away” the magazine to qualified readers (it’s called “controlled circulation”), thus cutting the marketing costs associated with distribution — it was thought that advertising could make up the unrealized potential revenue in subscriptions.

However, as advertising revenues have declined, the savvy business-to-business media companies have turned, with great success, to a business model more focused on events, data/information products and services.

So what does all this have to do with a bicycle ride across Iowa?

I’ve written before that “all companies are media companies” today.

Likewise, all media companies need to become marketing companies — with a goal of making a large portion of their revenue mix come from sources that reflect the desires and passions of their audience.

At Hammock, we call it “content-driven commerce.” It means that we don’t think content needs to be not-for -profit, even if it doesn’t generate revenue from advertising OR subscriptions.

I have no idea what Gannett does with the procedes from RAGBRAI. I’m guessing the event probably needed to be subsidized in the past, but now breaks even — at least. I am guessing that it pumps millions of dollars into the economies of the state and the cities it passes through, making it a great ROI on any tax dollars that may be used to support the infrastructure (police and transportation department involvement) — better, certainly, than the ROI on a new stadium, say.

However, I do know of a company, The Competitor Group, that is a juggernaut in the type of special niche lifestyle media and event industry that reach a passionate audience who love the events the company produces, they never even think to ask if it’s got anything to do with advertising. They know how to make lots of money on events that may seem to their participants as not-for-profit. And they do it by, in part, owning digital and print media properties.

If you want to save your newspaper business, do two things: First: Figure out how to off-load the capital you have tied up in those printing presses. Second: Get out of the “selling news” business and get into the business of helping your audience become what they want to become. Start creating and selling them products, events, services (yes, even media) that make people smarter. More plugged in. Cooler. Healthier. More successful. A better parent. A person who wants to have more fun and is more passionate about their work. A person who love their local churches, civic groups, schools and neighborhood.

Last thing: Start riding a bike a few times a week. It’s a great place to think. And as a friend of mine (a former Gannett employee) who is participating in RAGBRAI this year (and who has done so several times), “Everything looks better from the seat of a bicycle.”

*I’ve written about Gannett many times in the past, but this 2009 post is a good synopsis of what I think about what happened at the company, and others like it. Also, my standard disclaimer: I do not blame the people who were “content” people while the roll-up of newspapers happened. I blame the suits.)